It's nice to get what you want once in a while.

But as Sir Michael Philip Jagger said: You can't always get what you want.

Okay, I didn't get the phone number that I wanted for the thrift store. But I got close enough. The way things have been going - I'll take close.

The number in question? I'm a 60s Rock and Roller. Music from the 80s really didn't do much for me, but for decades whenever I've gotten a new phone number I've always tried to get 867-5309. This was of course Jenny's number.

Customer:   Hey this is a great thrift store, Dave. When I get home I'm going to have my husband call you about those Harley Davidson spoked wheels. What's your number here?

Suppose the customer will remember our number after that? Yeah, me too.

And in other good news: Wonder Woman's sister (I haven't thought of a clever name for her yet) has flown down to help in the birthing of this obstinate thrift store that doesn't want to be born. Good thing too.

I went to the Florida state Department of Revenue to get our sales tax account set up. It was my first full day out of bed since the major surgery crap from a few weeks ago and  . . .

Thanks to Dana at Mid2Mod for the spelling of ni-ey-yine. Follow the link to see the Tommy Tutone video of Jenny.

Do You Sometimes Get The Feeling The Path You're Following Is The Wrong One?

Labor Pains in the Birth of a Thrift Store


If I were a superstitious man, I might start thinking "Hey, what's going on here?"

Wonder Woman and I have been planning this Thrift Store / Dave's MidCentury Stuff retail location in a big way since the beginning of July. Let's see what's happened since then.

July 4th - Dave takes an emergency trip to the hospital to get stuff fixed that he knew was going to have to get fixed sooner or later anyway. Getting old sucks. Dave out of the loop for about 10 days.

Aug 10th - Stuff installed in July to fix Dave fails. Two more weeks in hospital. This time no laparoscopic or minimally invasive technique. Regular old sharp knife - big incision - lots of healing time. Getting old really sucks. A lot. Dave out of loop for about 13 days, and then stuck in bed healing for a couple more weeks.

Aug 26th - Tropical Storm Isaac sits about 240 miles SE of me as I write this. It is threatening to become a hurricane as it draws nearer to Key West. Once it passes Key West and starts moving NW up along the west coast of Florida (where we live) it might very well become a category 2 hurricane. It's going to be off our section of the FL coast at around midnight tonight. Yeah, thanks for that. Midnight.

Add to this the fact that even though we've had possession of the leased building since August 1, we really can't start setting up because of improvements that the building owner has promised but not yet delivered.

Man, I can't wait until this baby pops it's big fat thrift store head out from between our (the continuation of this metaphor could get weird. I'm going to just move on) and we can begin to plan for its first birthday party.

I was back and was going to be even better than before. Good ol Dave Two Blogs is back. (Dave Two Blogs.That was going to be my mob name. Hey, it beats Johnny Cheese Balls)  Dave's Mid Century Stuff and Friends of Abandoned Animals Thrift Store. Two blogs for one. Then something happened.

The three new parts I had installed? The ones I mentioned in my last post? You know the ones that work in two out of every three people in the average population, the ones that would have cost one hundred and thirty eight thousand dollars to install, (thank you insurance co., but why did you feel it was necessary for me to actually see the bill?), the ones that I depended on to pretty much keep me alive - failed. I guess I'm the one in three in which they don't work. 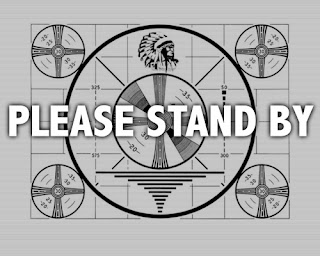 I just spent the majority of the last two weeks back in the shop.

I need about three weeks of posts to put in the queue before I come back again.

Until then I'm putting up the test pattern. We are experiencing technical difficulties
and will be back fairly soon with . . . more stuff.
Posted by Dave 2 comments:

If you'll recall, my last post mentioned checking my mid-century butt into the shop for some repair. I did so, and now have even more non original parts than I did before.

Now that I'm up and around Wonder Woman and I (well, mostly Wonder Woman) have been working on getting the thrift store open. Grand opening is scheduled for September 3rd, Labor Day.

We've been hitting the auction houses pretty hard, and have a fairly decent amount and mix of stuff so that we can appeal to a broad segment of the thrifter population.

There will also be a "Dave's Mid Century Stuff" section of the store where I'll be selling my excess.

I won't be posting every day for probably a month or so. Do keep an eye out for my multi-part post of "The Birth of a Thrift Store".