Okay, here's how the story goes - as I've read it. Someone named J. E. Tramel was sitting under a tree dreaming of one day having a lot of gold. Apparently this was going on in Baton Rouge, LA.

Fast forward X many years later J. E. Tramel has trademarked "Dream Tree", and someone is producing these neat little trees made of twisted wire with tiny little foil leaves. Kind of reminds me of metal bonsai trees. The Label Reads:

It doesn't do anything, just sits there
looking pretty

and then a hand written registration number 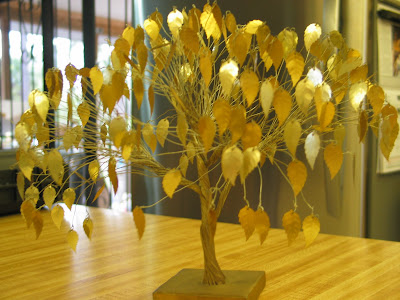 They look like this. Wonder Woman found this last Wednesday when we were out doing the thrift store thing. There's more. . .


These things have sold for as much as ninety dollars on ebay. Can you believe that? Ninety Dollars!


That doesn't really surprise me though. ebay has a world wide audience, and if you have enough people just about anything will sell.

Well, I like it. Wonder Woman spent an hour pulling all the branches and leaves apart to give it that autumnal, losing its leaves look.

So that was Wonder Woman's art pick for the day. I found something else that I liked just as much. Only in orange - my official SPLASH color. Need a splash of color - go orange. That's my take anyway.


Here it is: a painting by Italian painter P. G. Tiele. Can't find much on this guy except that he's Italian and considered a mid century painter. Whoopee!


Doesn't matter. I bought the painting before I started researching him. My philosophy: buy art because you like it, not because it might be worth something some day.


Oh, so you think you know me now. You were pretty sure I bought it because it was priced really well. You may be right.

The painting itself is 4 X 5, the frame takes it out to about 8 x 10. Some days it's worth thrifting.