It was the same day that we found the George Nelson Bubble Lamp shade. Man we were on a roll.

And it was the same thrift store where we got the Tulip Style Chairs . You put all that together and you're bound to find something worth writing about. We did.

Sewing Circle people - look at this.


Now keep in mind that Mr. Modtomic would have had this cleaned up for you already if this was his post. Down here in Florida we move at a little slower pace. We pulled it off the truck and took pictures. We'll get around to cleaning it a little later. Please bear with us and the grime.

Unless you were there when it was purchased new, it's kind of hard to date a Singer sewing machine with accuracy. People who know these things say the 401A was produced between 1957 and 1961. We'll call that close enough. It's a pretty good bet that the cabinet was bought at the same time. I mean look at its design. Mid century all the way.


I know what you're thinking. "Yeah, it looks okay, Dave. But how does it run?" Funny you should ask. As it turns out Wonder Woman owns two other vintage Singers. We have a 500A and a 503A. And in typical Wonder Woman fashion she has torn them both down to see what makes them work, done some minor repairs, and generally familiarized herself with the operating principles of vintage sewing machines.

This one is her favorite. I'm not sure of exact dates so don't hold me to any of this, but in the 1950s there was the 300 series, then the 400 series, and then the 500 series Slant-O-Matic Rocketeers.

Slant-O-Matic and Rocketeer? Are you kidding me? What excellent names!

So this one was made between '57 and '61, and our Rocketeers were probably made in '61 - '63. She used the Rocketeers for all the sewing in the Sofa Reupholster Post.


Sew you're wondering what we paid for this aren't you. Did you notice I said "sew" instead of so. Hey, I'm funny. I'll keep you in stitches. Oh, there was another one. Now if I can just thread myself back toward seriousness. Thread, get it? Somebody stop me.

Okay - fifty bucks. Yes, that's right all of this wonderfulness for fifty bucks. You know what else? You don't have to use a foot pedal to make it go. It has an attachment in the case that allows you to use knee pressure on a lever that makes it go. Is that cool or what? Even with your foot in a cast you can still sew. 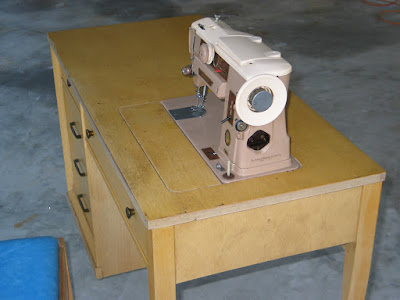 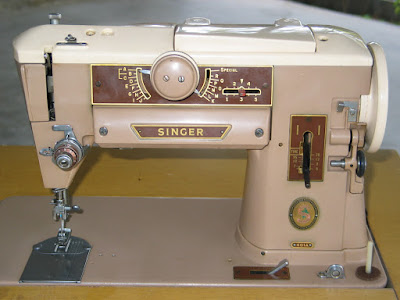 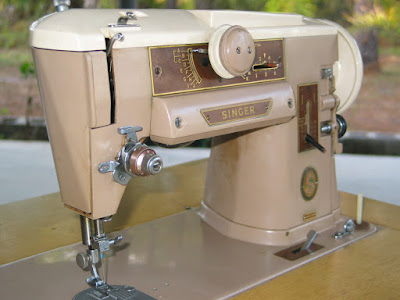 I've heard this machine when Wonder Woman was testing it. It sounds solid. It runs like a well oiled machine. Sewing machine that is. We now own three vintage Singers, and a mid 60s Kenmore. I think we're set for a while when it comes to sewing machines.