If it's Friday it must be time to look at some more of Dave's stuff and tell him what he has. It's a Friday thing. And today it's a Joe Friday thing.

My most popular post so far is the one about the Sears, Roebuck & Co. tulip chairs and tables I discovered by accident. Seems a lot of people like this stuff. So come on in and read about what I found at a no-name thrift store in Cape Coral, FL. Dragnet style.

Wednesday, February 8th, it was sunny in Cape Coral. I was working the day shift out of thrift store division. My partner is Wonder Woman.

My partner and I were patrolling Del Prado Boulevard looking for deals. We noticed some activity at a hospital charity thrift store. We stopped to investigate.

Two thirty five pm. We checked with the manager on some lucite chairs we had seen in a back room. The manager informed us that all three were for sale but that one was broken. We had a look.

Occasionally thrift stores charge too much. Sometimes they charge a fair price. When they start charging ridiculously low prices for cool stuff that's when I go to work. My name is Dave. I carry a badge. 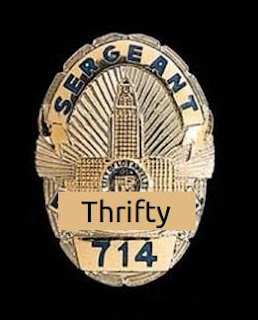 So here's the deal. They're lucite, acrylic, plexiglass, or something. They're from Sears. I'm guessing early 1970s. I don't know. What do you think? Ever seen 'em. Ever own any. Know what they are?


Love to hear your thoughts/comments.