Before and After Sofa Reupholster

Did you ever go to a thrift store and see a terribly ugly sofa that just called your name and said "recover me"? We did. Here's what we did about it.

So we're out thrifting. We find this sofa. It's ugly, but its bones are strong. It's about 7 feet long and seemed a good fit for our smallish house. We paid thirty five bucks for it in early 2011 and dragged it home. Here's what it looked like shortly after we got it home. 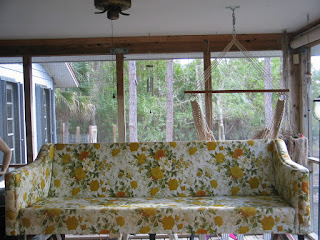 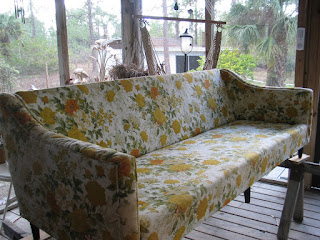 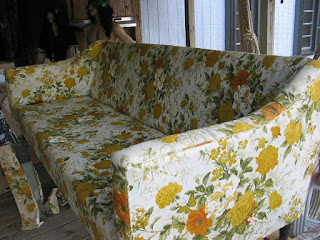 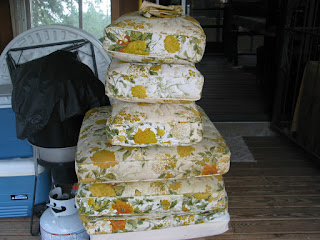 A little research and we discovered that fabricguru.com will ship any amount of fabric for just under five bucks. Having never done upholstery before I decided we would opt for inexpensive fabric so as not to have lost a lot of money if things deteriorate and the stripped sofa frame goes out to the curb.

You experienced upholsterers are probably having a good laugh right about now. Twenty four yards? What were you going to reupholster? Your house? Yeah, okay I over did it by a few yards, but I didn't want to run out.

Right about here I should say I did not lift one finger to reupholster this sofa. I paid the invoices and left the creative to my wife, Wonder Woman. This is what I call her because I haven't found anything yet she can't do. When I say I did something that means me. When I say we that usually means Wonder Woman did it by herself.

So we started stripping off the old fabric. We only had this much advice - remove the back first, pull everything off without tearing it because you use the old pieces as patterns for the new fabric, and get a strong sewing machine. We did all of that. I'll tell you about our 1960 Singer Slant-O-Matic sewing machine, made in Anderson, South Carolina, another time.


Fast forward about 6 months. Patterns were cut and sewn, padding was purchased, old legs were sawn off, and poof! Almost new sofa.


I found a place that sold high end cushion foam cut to my specs on the internet. Two weeks later new cushion material arrived along with the black stuff that is always stapled to the bottom of furniture. You may never see it, but I know it's there and it does matter.

New cushion covers were made, zippers were installed, and everything came together just right to give our ugly old flowered sofa a new ten year lease on life. 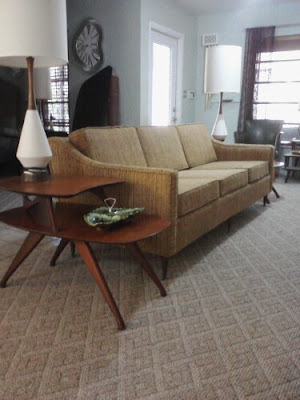 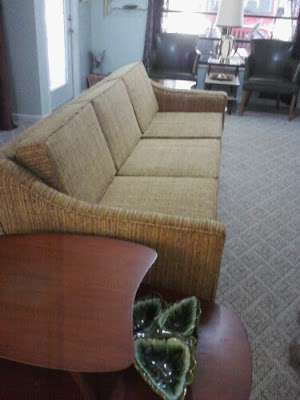 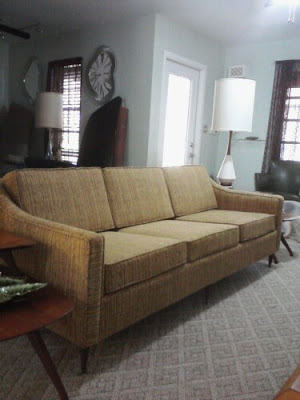