Before and After Danish Modern Floor Lamp

So it's last December (2011) and I'm carousing around ebay. There in the twenty eight day listings I find this 4 foot tall danish modern floor lamp. As is.

As luck would have it, it was in Palm Beach.

Florida may be terribly long, but it's not very wide. I was able to make it to Palm Beach from Ft Myers in about an hour and a half.


This is the before picture as seen by me on ebay.


I get the lamp home and unfortunately it still looks like this: 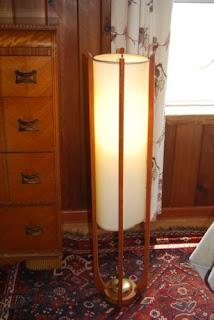 But upon closer examination of the shade I find this:

To be fair, I knew it was like this. That's why I only paid seventy five bucks for it.

If you read my sofa re-upholstery post, you'll remember Wonder Woman. That's my wife. She who can do anything. I'm the idea man and she's the turn it into reality woman.

Twenty five dollars worth of lamp shade material and four hours later Wonder Woman had made a new shade for the lamp. Now the decent lamp with the falling apart shade looks like this:

The most observant of you will notice that the new shade is about six inches longer than the old one, and that it's sitting on a table instead of the floor. The darn thing just looked so nice we couldn't hide it on the floor so now, until the 1962 room is finished (to be mentioned in another story), it'll be a table lamp. A really tall table lamp.