It's Monday so that must mean it's show and tell time from the weekend's activities.

What a diverse mix. Let's see . . . we have books, grapes, luggage, recording tape, and extra stuff. The best stuff is inside.

We started our trip at the Lehigh Acres Goodwill store. I usually always find something here. Today it was fruit. Grapes in particular. The big acrylic home decorating kind of grapes. Three dollars. Can you believe it?

So we ran over to LaBelle, FL to the Kiwanis Thrift Store and found an old Samsonite Train Case. It's in nice shape. The mirror and tray are both there and in one piece. That's unusual. Usually it's just an empty case. It doesn't look like it ever had a lining. Two bucks later it belongs to Wonder Woman.

I found a really nice American Tourister Train Case a couple of weeks ago in a church thrift store. The tray was intact, the lining was nice, but it was the no mirror model. Two bucks. Wonder Woman has already turned it into an Official Wonder Woman Utility Case full of Genuine Wonder Woman Accessories or I'd show it to you.

Also at the Kiwanis store I found this collection of second rate, knock off interior decorating and home improvement books. 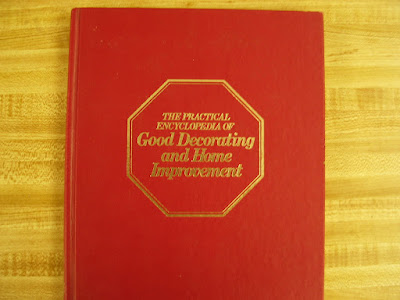 Looks like it was an eighteen volume set. I found fourteen of them. I negotiated a price of fifty cents apiece. Later I'm getting ready to haul seven bucks out of my pocket and they give me the twenty five percent off discount 'cause I'm so good looking (or old, I don't remember which).

I already showed this in the Ceramic Dish Update yesterday, but I like it so much I want to show it again. Seventy Five cents. 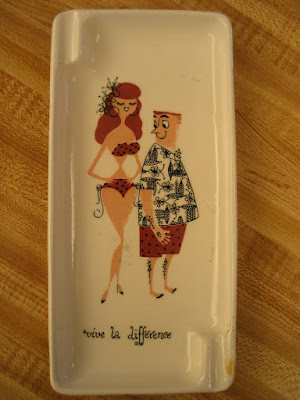 Wonder Woman has an interest in health and medicine and stuff, so she picked up this naked man book for a buck and a half.


I want the primary color Pyrex nesting bowls. You know the ones - blue fits into red which fits into green which fits into yellow. They want about forty bucks and up for these complete sets. I'm a little too cheap to spring for that so I've decided I'll get them one at a time no matter how long it takes.

Here's the first one; the two and a half quart green bowl. Good shape. No major paint loss. Two bucks.


Also at Goodwill was this Swedish, Rainbow Wood Products wooden tray. It may be teak, who knows. It's eighteen inches across and that's largely cool. Two more bucks.


Let's say you're having a party and you need to keep the tray of stuffed mushrooms warm. What to do!? The Salton Warming Tray to the rescue. This looks like it's from the 70s, but it has the tapered legs, dark wood handles, and the dark wood veneer strip on the side that give it enough of a 60s vibe that it'll do. Two more bucks. I seem to be the king of two bucks lately.


I don't have a picture, but I also found a large plastic bin full of 7" recording tapes for a reel to reel tape recorder. Forty four 7" tapes. Not the prerecorded type but the blank type that you record on yourself. Twenty bucks.

As it turns out I have one of these:


I'd say that was a productive weekend. Lotsa neat stuff and I only spent about forty bucks. That's cheaper than the movies.

We'll be back later with . . . more stuff.
Posted by Dave