If it's Friday it's time to try and identify something.

Do I have a Dreamy Danish Designer chair or a dud?

A couple of weeks ago I was making my rounds of the major thrift stores and I saw this chair. I could imagine it had potential so I fired off a couple of cell phone pictures to Mr. Modtomic or as I call him, Superman.

A while later Supe got back to me with a "pretty close".

Here is what I sent him: 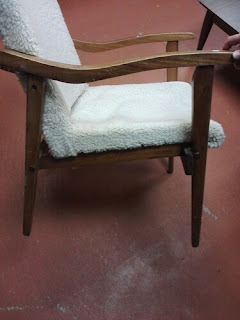 And here is what he sent back: 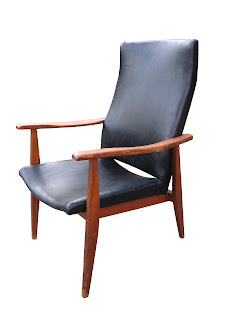 This one is spot on in much of the detail. The arms might be a bit different, and this one is a high back, but close enough. This one is for sale by Cain Modern for $795. So of course since the day Mr. Modto Superman got back to me, I've been referring to this frazzled piece of wood and sheep skin as "the 795 chair".

Come on in and see what happens next.


So two days ago I'm out thrifting in the same area, and I stop in to where the 795 chair lives wondering if it might still be there. There it sat.

I found the most harried, frenzied, and busiest employee in the store and asked them to negotiate with me. Later it's mine, and in the back of the truck.

Here's what it looked like on the work bench.

I don't think there's any doubt that this is a Danish Modern chair. I checked and it's not Slavic Modern. (that's an inside joke) But, man that sheep skin's got to go. A couple of screws later it looks like this.

Now that I have the seat off maybe I can get rid of that sheep skin. Here's the before of the seat.


So I worked to remove the sheep skin, and I think I found the original fabric underneath. A green, coarse weave, burlapy kind of fabric. Some of you fabric people probably know what it is. Help me out here.

So the green plaid stuff, even in it's state of decay, looks better than the sheep skin. Let's put it back on the frame and see what it looks like.


There you have it - the "Before" picture.

Don't hold your breath waiting for this one. It took Wonder Woman nearly a year to reupholster the sofa. Yes, I know she did it with no tools, no experience, and no help. It was a fabulous job wasn't it?

But before you know it, this chair will be refinished, have the excess bracing removed (if possible), and recovered. Proving once again, it's good to marry a woman who knows how to use power tools.